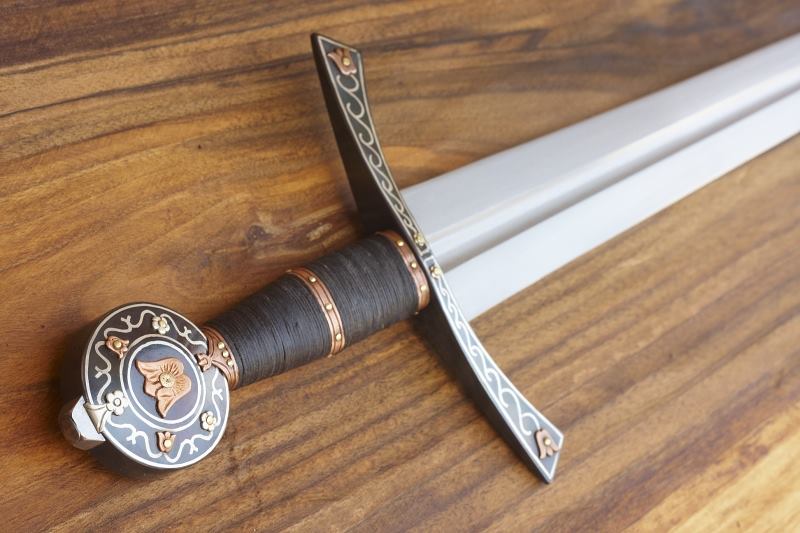 „For what else is it worth to raise a sword? For what else than for defence of love? I wish them to have firm pillars of harmony which will protect their happiness so that there will be no need to raise any weapon to fight for it.”

The sword was ordered as a wedding gift. Complicated time had passed before the sword was born – my divorce. I doubted from time to time if I will be able to finish it, but now I’d like to thank to my customer for his patience and understanding of my situation.

How was the sword created, my inspiration and what is it based on?

Apart of my job I am keen on photography and when studying it I was impressed with the symbolism, which is used in art from way back. Every work of art consists of form and content. I was focused just on the form previously – the hand-crafted part of production – but I was playing for some time with an idea of application of this even for the content.

When the customer came up with his vision, I was immediately enthused by it and I knew it was the right time. The customer wished a sword without any connection with a particular piece from the past.

A sword is a strong symbol by itself. Not only in stories it is related to archetypes, a sword partially defines them with its power as well. When we hear the word „a sword“, we can feel some vibrations. The word whose content comes from depths of our subconsciousness.

Because I wanted to make a sword tailored to my customer’s needs, I had to find out what does he like and what is typical for him. The sword should not be only for him, but also for his future wife. The client loves tulips, his fiancée adores blossoms of a Chinese cherry tree. She comes from afar, just as the blossom she chose, from China.

From the point of view of symbolism, a red tulip is expression of love. I do not know if my client chose it on purpose, but this magnificent flower has its origins in China. A Chinese cherry tree is associated with woman’s beauty, femininity or love.

I made a draft of basic proportions of the sword according to the customer’s demands. The sword is on its own simple and functional. I started to create the inlay on already prepared basic design of the sword. Then I placed the symbol of him on one side of the pommel and her symbol on the other side. Both are situated to the centre of the pommel. Just like any coin is formed by two faces and one can not exist without the other.

The three pillars keep the balance in our lives: family, job, friends and hobbies. That is why I placed three flowers representing the pillars around the main symbol. Connection of those three flowers makes equilateral triangle.

Number three is thought to be the first real number in terms of symbolism and it contains beginning, progress and ending. Birth, life and death. Past, present and future. Father, mother and a child…

And because harmony and complementarity are important in a relationship, I placed perpendiculars to the sides which have arisen from the reverse side of the tip. Each blossom of both partners as symbols of the pillars of the other person. A triangle is formed by interconnection of three other flowers. They both together form a six-pointed star, hexagon, at whose centre they meet.

Hexagon is considered as a symbol of the macrocosm, mental toughness, inseparable masculine and feminine energy.

I placed the blossoms on the cross-guard as well. A sea is depicted on the cross-guard as a symbol of distance, which lies between the partners. Whether the distance is great in terms of geography or culture, they finally found the way. The sea is drawn as a silver line, which unites them.

I used brass for making tulips and silver for Chinese cherry tree blossoms. All of them are hand-cut, manually filed and polished.

A silver wire connects the blossoms and its lines are embedded into the pommel and cross-guard by inlay technique. The groove is engraved on the iron base first, then the silver wire is set. Everything was polished in the end.

The pommel and the cross-guard are dyed blue in fire.
When talking about symbolism of the colours, the Chinese believe that the blue tone brings blessing from heaven. In Europe it signifies peace, desire, loyalty, gentle feelings, satisfaction…

The blossoms are fixed with small rivets onto the sword, except those blossoms on the pommel, above the hilt and under the pommel.

Conclusion
It is one of the first swords, which I completely designed. When fine-tuning the project I used an interesting technique of Peter Johnsson, who I was honoured to meet in person during a symposium, where he had a lovely talk about it. If you want to know more about his technique, take a look on his website: